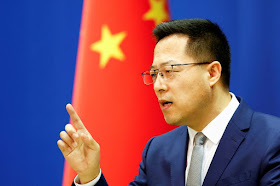 (Martin Pollard, Reuters) China's Foreign Ministry said on Monday it was unaware "of the specific issue" after the Vatican accused Chinese authorities of violating a bilateral pact on the appointment of bishops by installing one in a diocese not recognised by the Holy See. The Vatican said it learned with "surprise and regret" that the bishop of another district had been installed as auxiliary, or assistant, bishop in China's Jiangxi province.The appointment appeared to be one of the most serious violations of a 2018 agreement between the Vatican and Beijing on the appointment of bishops. Asked about the Vatican's statement, Chinese foreign ministry spokesman Zhao Lijian said he was "not aware of the specific issue you mention". "What I wish to stress is that in recent years China and the Vatican have maintained contact, reached a series of important consensus, China-Vatican relations continue to improve and also promote the harmonious development of Chinese Catholicism," he added. "The Central Government is willing to continuously expand the consensus of friendship with the Vatican side and work together to uphold the spirit of the interim agreement." (...)
Il sismografo ore 14:14
Condividi
‹
›
Home page
Visualizza versione web